If I had a nickel for every time I heard about the story of someone having to tear down their layout and not being able to save it I would be retired a wealthy man.  Now having said this you'd think I would know better.  I think you could guess where I'm going with this.  In my up coming LDJ article I state "Having to move and tear out a layout can be a traumatizing experience."  This is true but there were a lot more traumatizing things going on in my life at the time which were directly the cause of the layout coming down.
4 years ago I had to move and tear down my Lehigh and Hudson River N-scale layout that I had been working on for 7 years.  To be honest I kind of lost interest in that layout.  There were good things about it, I was able to do a good job recreating 3 L&HR interchanges (Andover, Sparta Jct. and Franklin) but the run was short and I was having thoughts of changing scales and prototype.  Once everything started settling down again, and I was living where I am now, I got to thinking about building the next layout in sections.  Building in sections would make it theoretically possible to move the layout, if I had to move again.
When I started planning my new layout, I was looking into using furniture grade plywood to build my sectional layout.   My friends Dave Ramos and Craig Bisgeier both have used plywood ripped down to dimensional sized boards (mostly 1X3) with much success.  Plywood used this way is cheaper and more stable than using dimensional lumber.  You get quite a bit of of 1X3's out of 1 sheet of plywood.  I’ll go into this further later on.
I was looking into doing something different on the new layout.  I changed scales from N-Scale to HOn3 and decided to model the East Broad Top during WW2.  This was started two years ago.  I had sold off all the N-scale and used the proceeds to build my roster of EBT equipment.  (I also had built over 50 feet of Gatorfoam benchwork.) Then finances got real tight last summer (Legal fees in divorce cases have a way of doing that) and I needed to sell off the EBT equipment. As much as I loved modeling the EBT I knew I had to do this.  Not to fret though because I had an equal interest in the Ma & Pa and had been researching it on and off over the past few years also.  And for the price I received for just one brass EBT engine I was able to aquire 4 pieces of Ma & Pa motive power (2 Bachmann engines with Tsunami decoders, 1 Gem Gas Electric and a PFM light 2-8-0 .  Also received a PFM 2-8-0 #43 for my Birthday last year :)
So, I’ve since changed prototypes to modeling the Maryland & Pennsylvania RR in 1943, 2 decks in HO scale, (and will be utilizing all the gator foam bench work built already.)  Along with wanting to make the layout sectional in case of a move again, I also wanted it lighter in weight so it would be easier to move.  Also, as many of my friends who have helped me would tell you I have a real phobia about drilling and fastening objects into finished walls of my basement.  I wanted to have a way to support the light weight bench work without fastening it to the walls.
Around the time I was thinking about all this, Sam Swanson came out with an article in Light Iron Digest on his super light weight bench work that he used to build his HOn30 modules.  He used Gator Foam which is a foam product that comes in 4X8 sheets, like plywood, and is laminated on both sides with a very thin wood veneer.  This gives the Gator Foam a lot of strength.  My friend Ted Pamperin uses Gator Foam for all his sub-roadbed and I was able to play with a piece of it at his place and thought that it should work in sectional bench work built similarly to how Sam built his modules.
What is Gatorfoam: 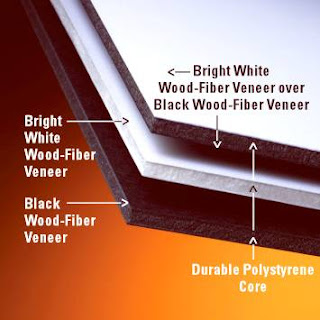 I will continue later this week on how I put together my Gatorfoam bench work.
Posted by Ted DiIorio at 10:33 PM