I continue to make progress on installing track on the layout.  I needed to get all the sections that I fabricated glued down permanently to the layout.  Some of the Fast Tracks turnouts have been giving me fits (OK almost all of them) with the Quicksticks ties coming undone while handling the turnouts for placement on the layout.  The Pliobond method of gluing the ties to the turnout just doesn't work.  I've done everything from reapplying the Pliobond to using the online tutorial's fix by heating the bonded sections with a soldering iron.  It just is not a reliable bond.  I've been able to rectify the problem by using gap filling ACC which has solved the problem.  My suggestion to anyone who plans on using Quicksticks is to either use my ACC method, or buy the pre-drilled version of the Quicksticks and spike the turnouts to them.  I still like Quicksticks because it's a faster way to get ties under your turnouts.

Other than the problems with the turnout ties, everything else has been moving along nicely.  I worked on caulking down the track that was recently installed, and I also started working on the siding located on the top level that serves T.H. Knisely Coal in Red Lion.  I'm trying to locate pictures of this business but so far have come up empty.  Working off Sanborn Maps I've determined that they had a ramp and covered coal pockets here. 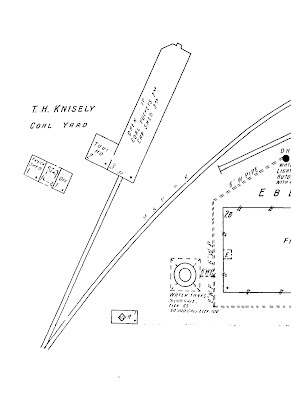 I started by figuring out what kind of footprint this structure will take up and where the ramp will need to start on the siding.  If I can get a picture I'm going to try and scratch build it, but it will need to be slightly compressed to fit this location on the layout.

Some of the other odds and ends I worked on were to fit track sections to connect both sides of the lower deck and to lay in the siding for National Biscuit in York, PA.

It's been pretty hot in NJ (as well as most of the country during this heatwave) so I'm planning on staying in during the day this week and get more done on the layout.