Laying Down the Gauntlet..

Work has been progressing through the Yard at York.  I have been working on installing turnouts in the yard ladder.  The far track in the yard, the one closest to the backdrop, contains a 50' - 100 ton track scale with a gauntlet style track arrangement.  While some track scales were built with single track and could take the weight of a locomotive running over them, the gauntlet style was designed so that the locomotive (or any car not to be weighed) can be switched to the "dead" rail and protect the scale.  The offset in the gauntlet track was just enough that the cars and loco could still be coupled but run on the separate tracks.

I decided as a diversion yesterday that I'd try building the scale track.  I figured I can use the #6 Fast Tracks jig I've been using to build my turnouts to help in building the gauntlet track that runs over the scale.  The following pictures show how I did this:

I cut 4 pieces of code 70 rail to length of of 135' HO scale.  The scale track here was actually 155' but I compressed it a little so it would fit the scene better.  I then cut those rails exactly in half so I can build both ends more easily in the Fast Tracks jig.

I started the gauntlet track by laying rail into the Fast Tracks jig along with some PC ties.  I soldered all of the rail to the ties in the foreground and only to the first tie on the rail in the background.  I did this for both ends. 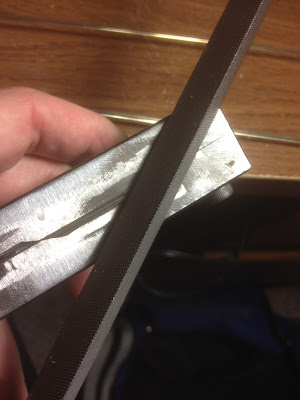 I took the point rails and filed them like you normally would do for regular turnouts using the Fast Tracks point filing tool for #6 turnouts.  I also at this point filed out the notches for the rail closure on the outer rails.
Once the points were filed I laid the point rail that goes in the slot opposite the main rail that was soldered to all the PC ties first.  I then measured with a scale ruler 1' foot (HO) and soldered the next rail to the PC ties ( this is done out of the jig now).  I then soldered the opposite rail using a HO scale fixture to keep everything in gauge.  You can use a Kadee fixture, Micro Engineering, or as some of my friends use, Rollies.  It's important you go back with a NMRA gauge and check your work. I then soldered the point rails to the throw bars.  Sorry, I didn't take pictures of these steps. 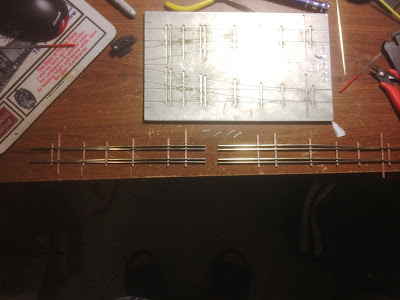 Here are both halves finished and ready to be joined.  I filed the edges on the ends that will be joined on my belt sander to make sure they were of equal length.  I then used rail joiners to join both halves together.  The final touch once I did this was to solder the joints. 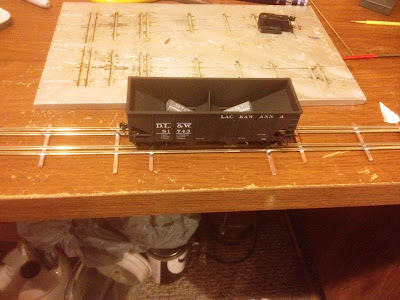 Here we see the infamous DL&W coal hopper, of the helix track work test,  testing out my work. 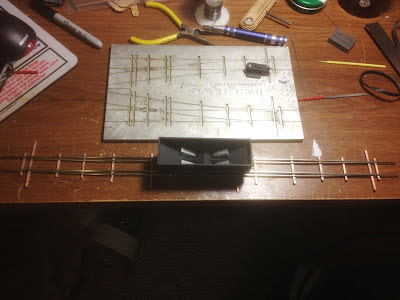 Here is a more overall shot of the entire scale track.  The longer PC ties will be trimmed to width and wood ties will be laid down during installation.  Now I'm just waiting to find some pictures of the scale and scale house.

This turned out to be a fun project that took me a only few hours to build.  It was a nice diversion. :)
Posted by Ted DiIorio at 11:19 AM